skip to main | skip to sidebar

It's only been five months since my last post.  I must be getting better.  I keep promising to be better about it but it keeps not happening.  No promises this time and maybe I'll improve :).

Now for the real reason for this post.  We're having another on-line virtual gaming convention!  The Virtual Con back in March was a success for our first attempt.  We had three games, each with six players, and fun was had by all.  I only heard good reports about the games afterwards.  And in a few cases, the con spawned some continued on-line games for some of the participants.  Following up on that, we want to do it again.

I've changed the name this time around to the Star Frontiers NetCon to distinguish it from the Virtual Con earlier this year.  NetCon 2012 is scheduled for Sept 14-15, just over a month away.  I'm planning on making this an annual event (with the NetCon name) and it will move earlier in the year for future years but I wanted to get two cons in this year to celebrate the 30th anniversary of Star Frontiers.  I'll also get announcements out more in advance next time.  I got a little swamped this summer and working on the Con got a bit delayed.

NetCon 2012 is completely free and completely on-line (although you're free to organize something in person in your area in conjunction with the con). The focus, as always, is playing Star Frontiers.  We want to get as many games going as we can.  To that end, we need referees, even if just for a single game session.  While we only had three games run the first time (I ran two of them), and I only know of two people that wanted to be in a game but were unable to (and that was due to work conflict and technology issues), I think we would have had more players if more games had been offered.  There were over 30 people registered and not all of them played.  I do know that several of the people who did participate would have loved to play in additional sessions if they had been available.  I was one of them.  The other referee and I gave up our slots in each others' games so that more players could join in.  So if you'd be willing to give it a go, please sign up as a referee and register a game. 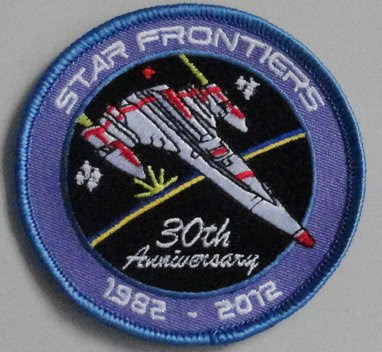 If you want to referee or even just play, jump over to the Star Frontiers NetCon 2012 web site and get signed up.  And just like for the Virtual Con, participants in the NetCon are eligible to purchase a limited edition Star Frontiers 30th Anniversary commemorative patch.  I got permission to produce these patches from Wizards of the Coast and they are not generally available but only to those who participate in Star Frontiers related activities this year.  If you missed out on the Virtual Con in March, here's your second chance to pick one up.  Details are available on the Con website and with your registration.

Hopefully you'll be able to join us in the Frontier and enjoy some on-line Star Frontiers gaming in September.  See you then.
Posted by Tom Stephens at 5:33 PM

I'm excited. I don't know if I can referee only because I'm still really new to the game (or rather, I haven't touched it since the late 80's and only recently returned to it) and the rules are still new.

If I were to run one, doing the Warriors of White Light game from the Knight Hakws boxed set might be fun.

Anyhow, I'll see what my schedule looks like for mid-September and try to join in one way or another.

Tom Stephens
I started playing Star Frontiers as a kid back in '84. After a long hiatus I'm getting back into it and thought I'd write about what I'm doing.